The only way is up – vertical farming 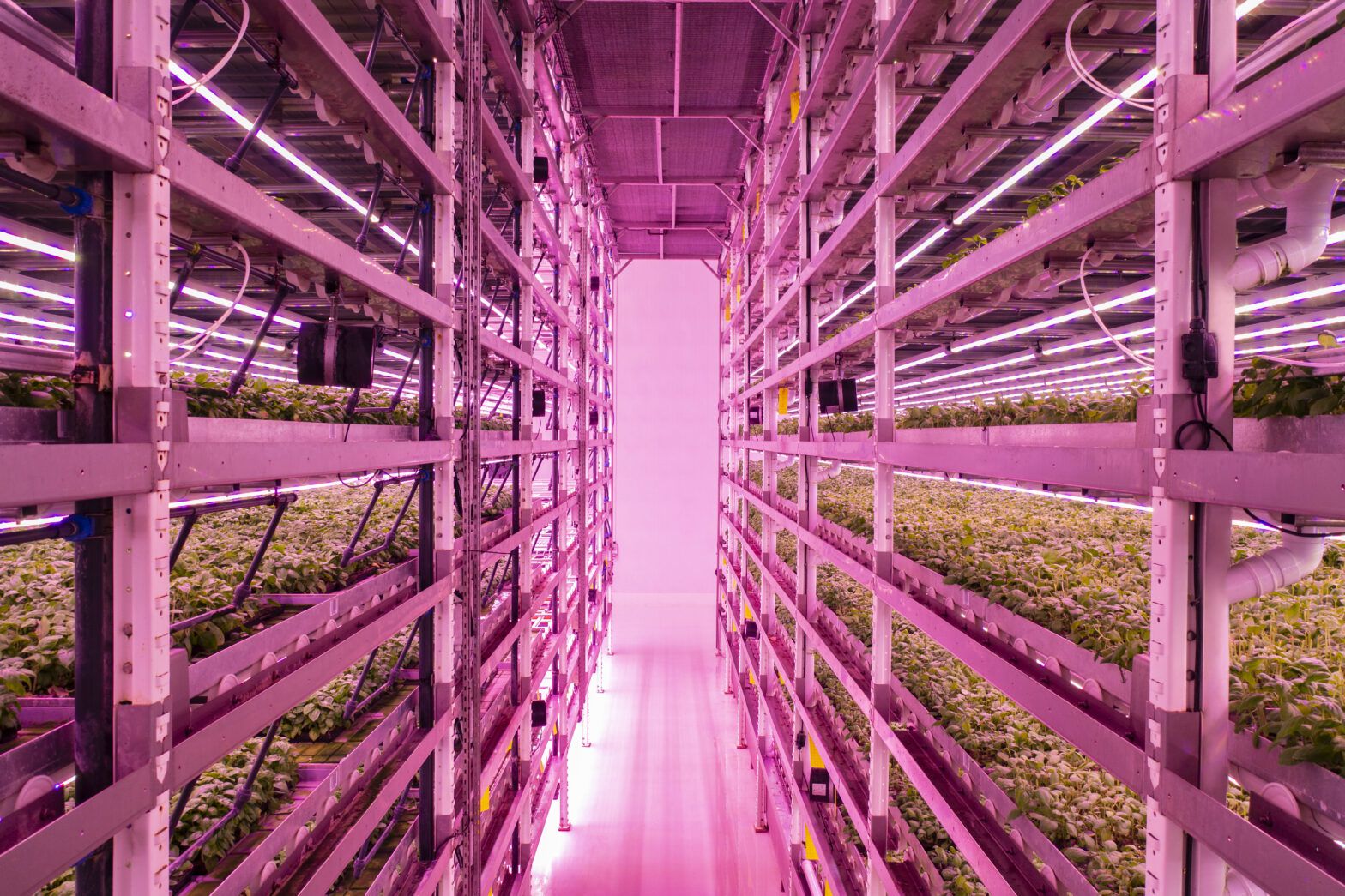 View with diminishing perspective of layered architecture and controlled growing conditions, including LED lights to feed plants the light spectra they require.

According to the World Wildlife Fund, global food production currently accounts for one-third of greenhouse gases, 80% of deforestation, 70% of terrestrial biodiversity loss and 70% of all freshwater use. It is clear that our food production needs to scale up dramatically in order to meet the growing demand for food as our population expands.

Vertical farming could be the answer to feeding our growing population in a sustainable way. It’s better for the planet and more resilient and flexible in the face of climate uncertainty and supply chain disruption; it’s also closer to the consumer, offers higher crop yields and uses smaller amounts of water and land versus traditional farming techniques.

It often deploys soilless farming techniques such as hydroponics (nutrient-enriched water), aquaponics (fish eating the plants and producing a natural fertilizer) and aeroponics (growing plants in an air or mist).

Vertical farming systems have been constructed in buildings, tunnels, shipping containers and even abandoned mineshafts. As of 2020, there was an estimated 30 hectares of operational vertical farmland around the world.

This vertical farmland is currently used to grow mostly different varieties of herbs, salads and leafy greens. However, there are those who believe that entire fruit and vegetable baskets can – and will, over time – be grown using CEA techniques.

As the global population expands and the fight against climate change intensifies, vertical farms offer a solution to several issues. The benefits are vast, from increased water and land-use efficiency and a reduction in the use of pesticides to decreased transportation requirements, year–round production and protection from environmental shocks like adverse weather events.

One day soon, we could be eating bananas grown in a European city.

Germany is already home to the Association for Vertical Farming, the “leading global, non-profit organization that enables international exchange and cooperation in order to accelerate the development of the indoor/vertical farming industry.” In France, vertical farming start-up Jungle recently raised €42m to create a Farming-as-a-Service operation which now maintains farms on behalf of third-party growers. In the UK, Worcestershire-based Shockingly Fresh is also already harvesting thousands of bunches of pak choi and lettuce destined for supermarket shelves – in their case in a naturally-lit farm.

We are still in the early days of this industry. If indoor farming is to realise its potential to increase fruit and vegetable production globally, the diversity of crops that can be grown indoors must increase.

CRISPR technology, for example, has the potential to unlock the vertical farming of many crops from cucumbers to mangoes and even almond trees. While it is unlikely that wheat or rice could ever be grown indoors, urban farms are likely to be interested in plants that have high value, freshness and perishability where proximity to the consumer is more important.

If these applications of genetic technology to modify plant architectures are successful, we may initially see fruit and vegetable production migrate to vertical farms. Specialist crops are likely to come next such as hops, vanilla, saffron and coffee. The possibilities are nearly endless.

For this to happen though, the capital and operating costs for CEA must come down drastically. However, if Wright’s Law is anything to live by this should happen sooner rather than later.