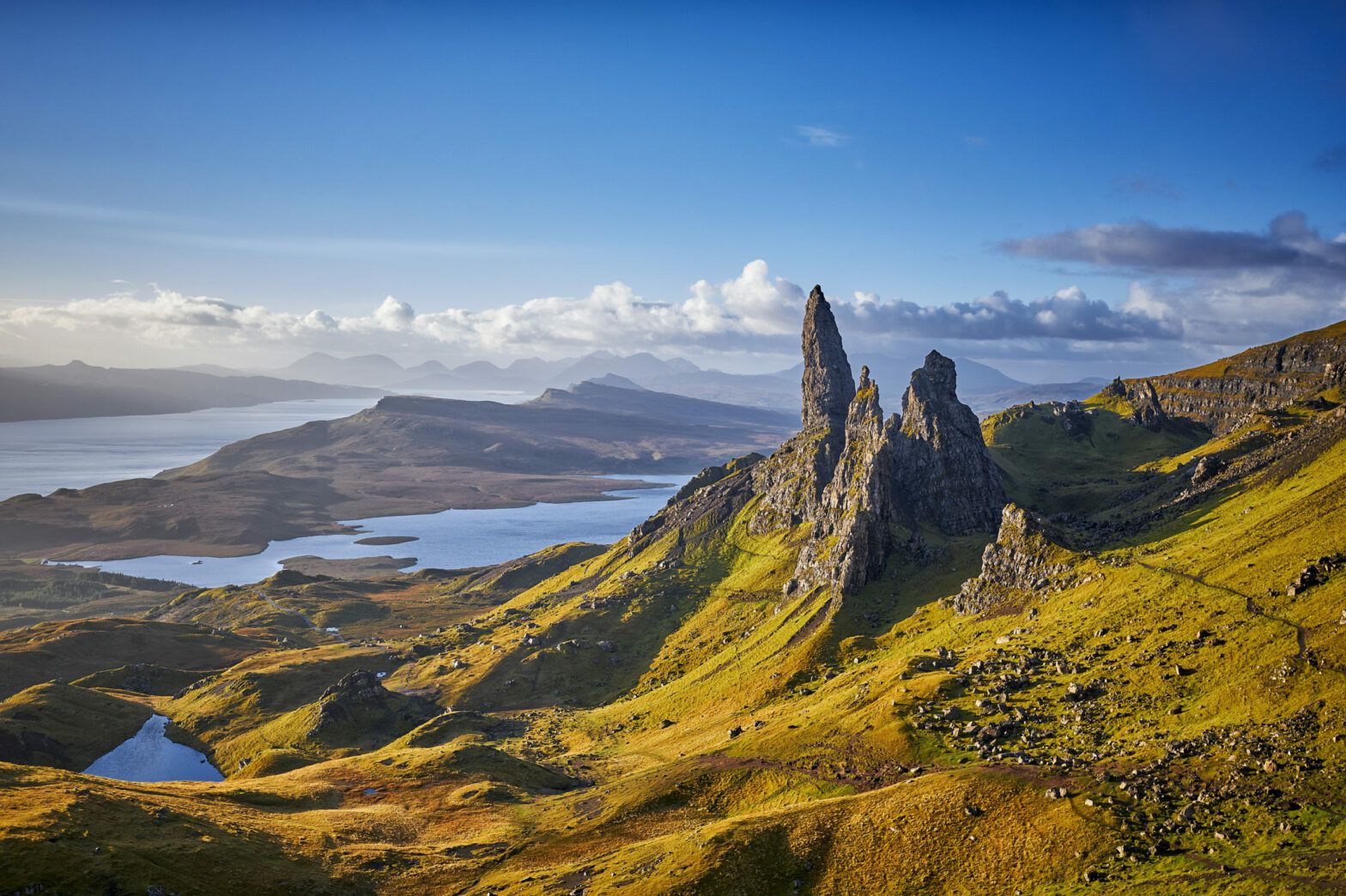 View Over Old Man Of Storr, Isle Of Skye, Scotland. During a beautiful sunrise and dramatic sky with a local shower here and there. The Old Man of Storr looms over Portree, Isle of Skye and is situated 7 miles north of the town. It is dominated by the 50 metre high petrified lava pinnacle of the Old Man of Storr, with a brutal tumble of cliff behind, and the panorama spreads across loch, sea and islands to the high mountains of the mainland beyond.

by Jessica Tasman-Jones, Portfolio Adviser 21 May 2020

Scotland is “punching above its weight” when it comes to the scale of its responsible investment, according to a report published this month calling for the local asset management industry to position the country as a global HQ for the growing industry

It also identified 35 funds run from Scotland as responsible investments representing 18% of the UK total.

Scottish asset managers are ‘punching above their weight’

JB Beckett, who co-authored the report with Ethical Finance Hub and the University of St Andrews, said until now the true depth and breadth of the responsible investment market in Scotland had not been reported.

Beckett said Scottish asset managers are “punching above their weight” compared to the UK as a whole. The country’s strengths were its ethical heritage, actuarial profession and expanding fintech sector, he added. “A progressive political backdrop through devolution has also been supportive to creating responsible initiatives,” he said.

The Scottish National Investment Bank is one such example. It becomes operational in the second half of this year and is chaired by Willie Watt, former Martin Currie chief executive, which Beckett hopes will provide a link for the asset management industry.

But there are challenges too, he admits, pointing to the industry trend of asset centralisation and concentration that has seen assets move out of Scotland. In particular, assets shifting to the US face less robust responsible investment frameworks, he says.

Among the recommendations of the report were that local asset managers work together to position Scotland as a “global HQ” for responsible investment.

That would mean local asset managers dropping the competitive approach they currently take to responsible investment, said Beckett. “Every asset manager seems to be racing to get ahead but in doing so is creating a disparate landscape.”

In fact, the report pointed to the lack of consistency around language as one of the challenges on collecting quantitative data on the responsible investment landscape, a problem not unique to Scotland.

Where are the UK hotspots for responsible investment?

Despite the common political system of the UK, SRI Services director Julia Dreblow reckons its useful to collect responsible investment information specific to regions or countries.

“When I have done this in the past, we found it useful to show to financial advisers and other intermediaries who might otherwise say ‘people round here don’t think like that’,” Dreblow said.

She added the responsible investment industry has traditionally been very concentrated in London, but that Scotland is a particularly interesting area to look into given Edinburgh’s role as an asset management hub.

“Not only have fund managers mostly been based in London but also industry associations and related NGOs like UKSIF, ShareAction, the PRI and others. However, this has started to shift in recent years, with UKSIF now holding an annual conference in Edinburgh and the development of the Ethical Finance Hub.”

Looking elsewhere in the UK, she said Bristol and the West Country have “always had a well above interest in this area” while Yorkshire also stands out as the birthplace of Friends Provident, which had been Quaker run and launched the UK’s first ethical fund.

Delayed COP26 set to be a boost for Scottish industry

Morningstar director for sustainability research Hortense Bioy commented Scotland faces a lot of competition from other jurisdictions all seeking to become hubs for responsible finance.

London, Paris, Luxembourg and Hong Kong are among the top examples, Bioy said.

The Paris Agreement had been hugely beneficial for France in terms of its positioning and Scotland would have been gearing up for the next annual meeting of the climate change conference later this year, she said.

“The fact COP26 is not going to happen this year is a big blow, but, who knows, maybe it’s going to have a bigger impact then because of the situation with covid-19.”

The United Nations conference is now set to go ahead in 2021.

Ethical Finance Hub director Graham Burnside said COP26 will be the most important international climate negotiation since the landmark Paris Agreement was ratified in 2015.