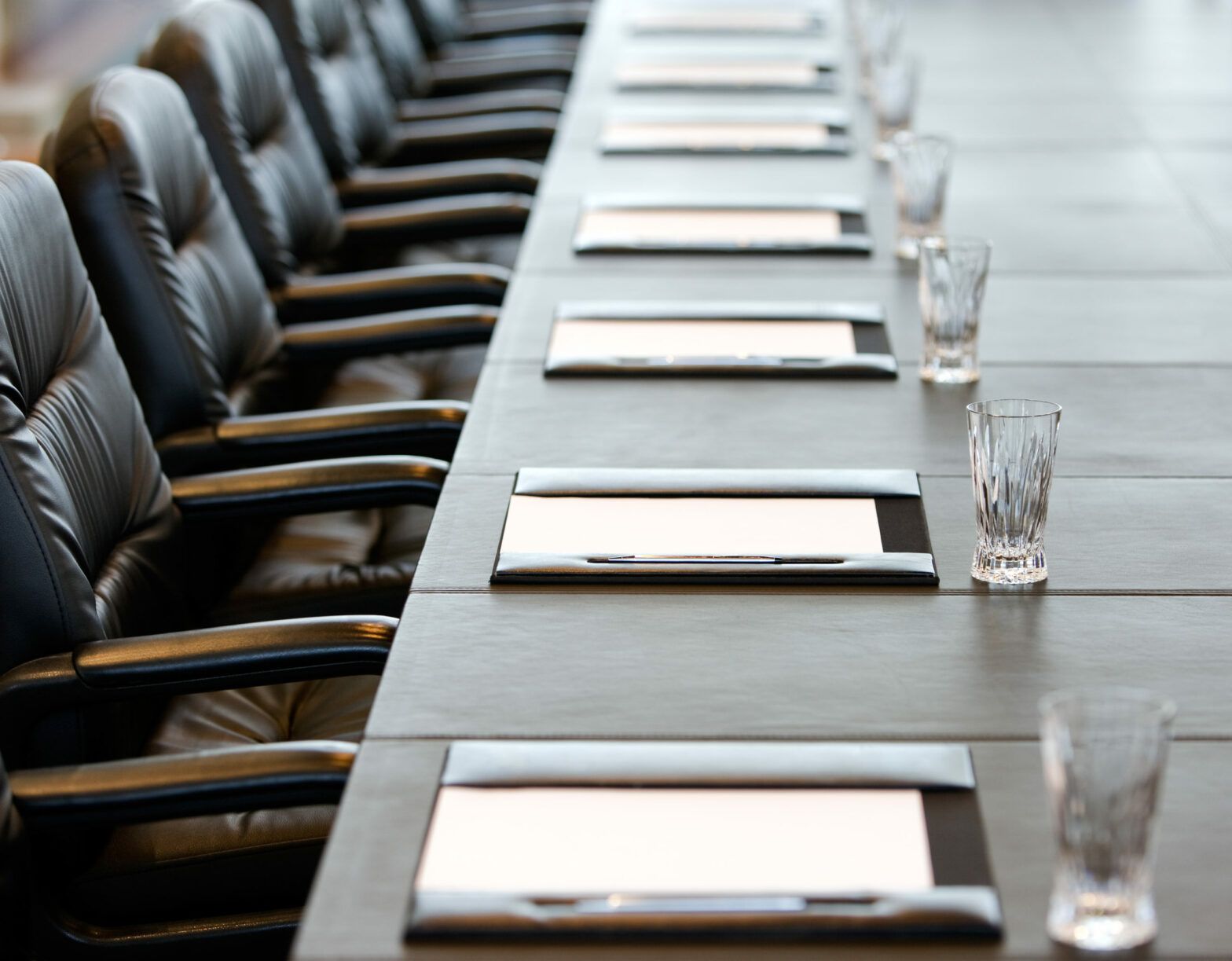 The boardroom table is set for the Annual General Meeting

RBC Global Asset Management (RBC GAM) has revealed that it has voted against management 100% of the time on gender pay gap issues during the most recent proxy voting season.

According to the group, shareholders are increasingly asking investee companies to disclose gender pay gap ratios and address any gender pay gaps that exist.

A number of studies show that the gender pay gap is closely very slowly, the report said. For example, women may not reach pay parity in the US until 2058.

The group said in a report: “RBC GAM will generally vote in support of proposals that ask companies to report on gender and racial pay equity where the company has inadequate policies and disclosure.

“In addition, we will support shareholder proposals that ask companies to create and/or report on initiatives seeking to prevent discrimination on the basis of age, gender, ethnicity, race, skin colour, national origin, sexual orientation, disability, Indigenous status, gender expression/identity, education, religion and other dimensions that are intrinsic to all people.”

However, the report found that although companies have historically faced many hurdles in gathering data that would acceptably report on gender pay gaps, the companies reviewed actually did have relevant data available.

In particular, it found that US companies are largely reporting on racial representation and meeting regulatory standards; many large global companies have been able to report on gender pay gaps; while companies were allowed flexibility to determine how best to calculate and disclose data.

Meanwhile, the latest report entitled Stewardship in action revealed the group has made a number of updates to its proxy voting guidelines. This included adding a specific consideration of indigenous people and their rights; greater focus on shareholder rights; and updated board gender diversity guidelines.

The latter change will see the group potentially vote against members of the nominating or corporate governance committees at comes whose boards have less than 25% female directors and lack an adequate gender diversity policy (in line with the guidelines of the Canadian 30% Club Investor Group).

“To place this into context, we voted against the election of 18.6% of directors nominated to the board at US companies,” the firm said. “In 73% of those cases, our vote against was at least partly due to the board failing to meet our minimum 25% board gender diversity threshold.”

The firm said: “Earlier this year, RBC GAM released Our Approach to Climate Change, which details our beliefs, approach, and key commitments to fighting climate change. We believe that active stewardship is an effective way for investors to motivate companies to implement strategies that consider the risks and opportunities associated with climate change.

“This includes thoughtful proxy voting on climate-related shareholder proposals. At the same time we released Our Approach to Climate Change, we became a signatory to Climate Action 100+.”

Meanwhile, RBC GAM noted that “this particular proxy voting season was unlike any other, as companies and shareholders alike were grappling with the impacts of the Covid-19 pandemic”.

One of the key changes is that the majority of annual general meetings so far this year have been held virtually. This year to 13 May, some 3,900 shareholder meetings globally were virtual-only, according to ISS Analytics, compared to just 286 during all of 2019.

“Our main concern about virtual-only meetings is that they have the potential to adversely impact shareholder rights,” RBC GAM said.

“For example, Berkshire Hathaway hosted a virtual-only meeting where shareholders were required to vote and submit questions in advance of the meeting; in other words, votes and questions could not be submitted in real time.”

The group is particularly concerned that virtual meetings are enabling companies to vet questions submitted by shareholders before they are passed on to management, while many companies also don’t offer real time voting.

“Although a change of process was required in light of Covid-19, shareholders need to monitor the situation closely to ensure virtual-only meetings do not become the new standard without the appropriate mechanisms to protect shareholder rights.

“Generally, we would withhold our support for the election of directors on the corporate governance committee if the company adopted a virtual-only meeting format and the resulting meeting format negatively impacted shareholder rights.”