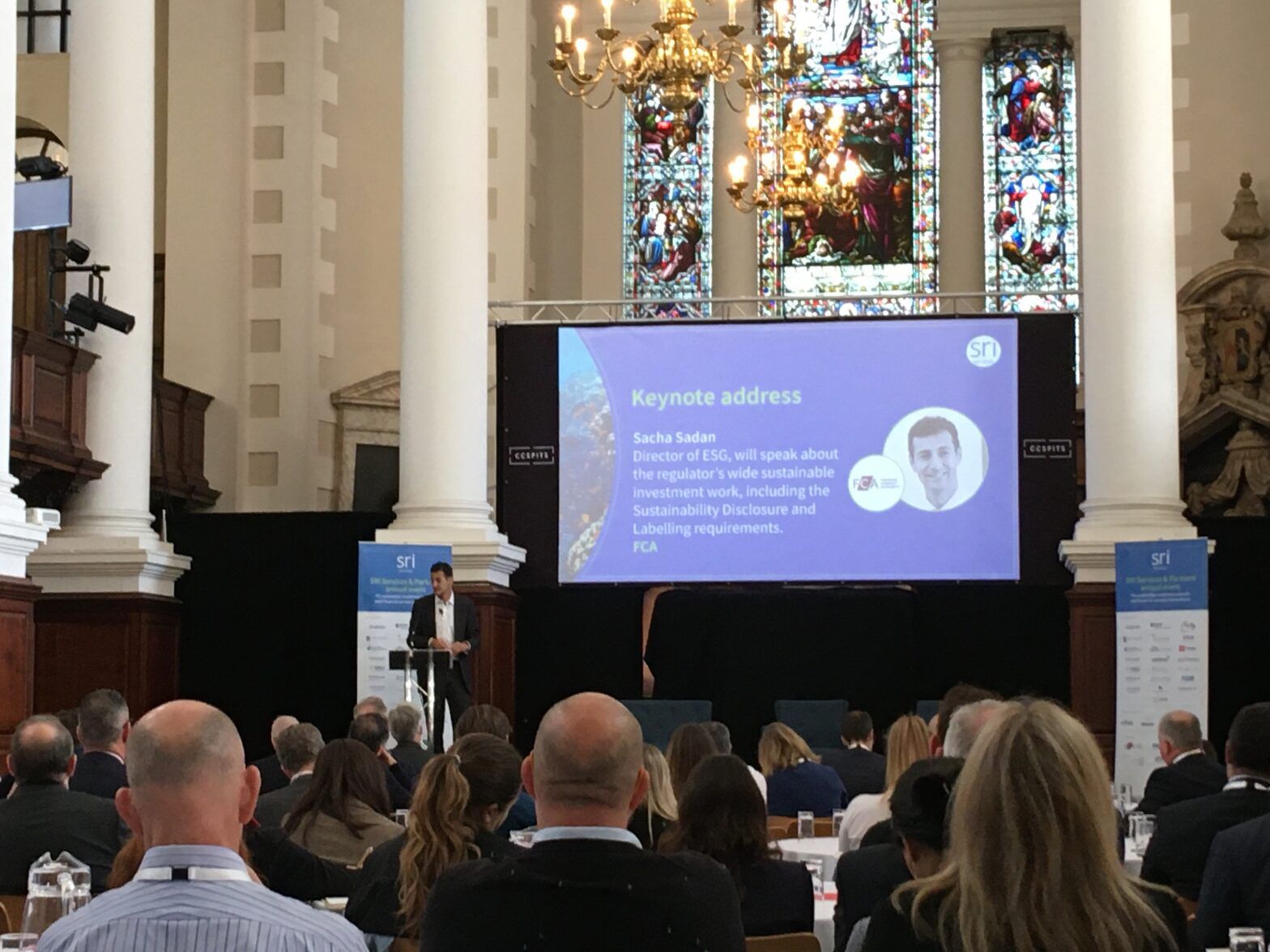 Here are some of ESG Clarity’s top takeaways.

ISSB – it’s going to be big

If there is something that is going to leave its mark on sustainable finance regulation over the next few years, Sacha Sadan, director of ESG at the Financial Conduct Authority (FCA), said it will be the ISSB, or the International Sustainability Standards Board.

A consultation on draft requirements for two levels of corporate disclosures – general sustainability and climate related – were launched in March this year.

“ISSB. This is going to be very big in this area over the next five years,” said Sadan.

“In simple terms, it will be one set of metrics on each sustainability topic. Hopefully it’s a metric CFOs, asset managers have all agreed on before.”

The “dream”, Sadan said, would be to have comparable metrics across different countries on a range of topics such as political lobbying, tax payment or even how quickly a company pays its suppliers.

On the topic of comparable regulation, when asked what the UK’s imminent Sustainability Disclosure Requirements (SDR) and investment labels regime had learned from the EU’s Sustainable Finance Disclosure Regulation (SFDR), Sadan said the latter had become a “race” to the highest number – for funds to be Article 9 instead or Article 6 or 8.

“It’s not one thing is better than another. We’re definitely not using numbers [in the SDR and labelling regime],” he said.

Sadan also commented the different types of funds under SFDR became a lot about what groups were excluding to get that high number, rather than how they were helping holdings improve. In the UK’s equivalent regime, he said, there will be more emphasis on investing in “improvers” and explaining why you are taking positions that might look unusual from a sustainability perspective.

Fixed income is no longer the safe haven it once was for returns, but it boasts some benefits in sustainability that equity can’t match, according to My-Linh Ngo (pictured left), BlueBay Asset Management’s head of ESG investment and portfolio manager.

“We’re on the fixed income side so we don’t have as much volatility generally as on the equity side. Although it’s been unprecedented the last year or so because usually when equity markets are very volatile a fixed income is the safe haven, but we haven’t really had that at all,” she said.

However, Ngo said BlueBay’s Impact-Aligned Bond Fund, which has been developed as a global strategy, has the option to invest in both developed markets and emerging markets, it can invest across the credit rating spectrum and can invest in non-corporates such as sovereigns. She noted the fund had recently been engaging the governments of Brazil and Indonesia on deforestation.

“There’s a limit to what the private sector companies can actually address because the countries determine the operating environment within which the companies are operating.”

Where companies would blame a government for not giving them freedom, for example, a bond strategy can engage with the government on these issues, My-Linh explained.

Sustainable investing in emerging markets can be deeply frustrating due to “on-the-ground” non-profit partners being wary of public links with investors and due to governments falsifying paperwork, according to Amarachi Seery, sustainability analyst at Janus Henderson Investors.

Janus Henderson works with an NGO focusing on the rights of children in the DRC.

“The fact that I can’t name the NGO that we’re working with is part of the problem, because charities and NGOs don’t want to be associated with investors, even sustainable ones like us.”

She commented it would be helpful if such partnerships could be open, because it would boost transparency and allow investors to call out multinational corporations when they give an inaccurate description of what is happening in a local context.

“When I go and speak to the Microsofts and the Teslas of this world, I’m actually able to say: ‘Well, I know what you’re saying isn’t entirely true because I’ve got people on the ground who have told me it’s not true,’” said Seery.

She added that efforts to actually establish the reality of the situation can be hampered by governments falsifying paperwork and lying to Western companies when they come to audit.

For those holding livestock or considering it, Sofía Condés, Senior Investor Outreach Manager at investor initiative FAIRR, gave the conference a rundown of reasons to be cautious with the sector.

She said according to the group’s research, the sector faces both physical and transition risks from climate change which have not yet been priced into the market.

Here are some material risks FAIRR has noted with the animal protein industry:

In time for World Mental Health Day this Monday, Amy Browne, stewardship lead at CCLA Investment Management, told the conference about how the CCLA Corporate Mental Health Benchmark – UK 100 had been working since it was launched in May.

The tool allows investors to compare companies on whether they are building conditions which allow mental health to thrive.

“What we’ve seen is that the benchmark that we’ve launched and created is really strengthening the hand of those within organisations who are trying to make headway on mental health.

“We have five performance tiers in the benchmark. Natwest called me up and said: ‘We’ve looked at the benchmark and HSBC, Lloyds and Barclays are all rated higher than us in this benchmark. We now have the top executives listening and we need to know what to do to improve,” she said.

Another example Browne gave was the chief medical officer at BT targeting a non-executive director to hold the chief executive to account on mental health, using the CCLA benchmark.

When it comes to financial returns on investing in mental health, Browne said the case is obvious. She cited Deloitte reports that found mental ill health in the workplace costs employers £1,652 pounds for every single employee in the private sector, while every £1 invested in workplace mental health interventions returned £5.30, or 430%, on average.