Climate change fight is the moon shot for the modern era 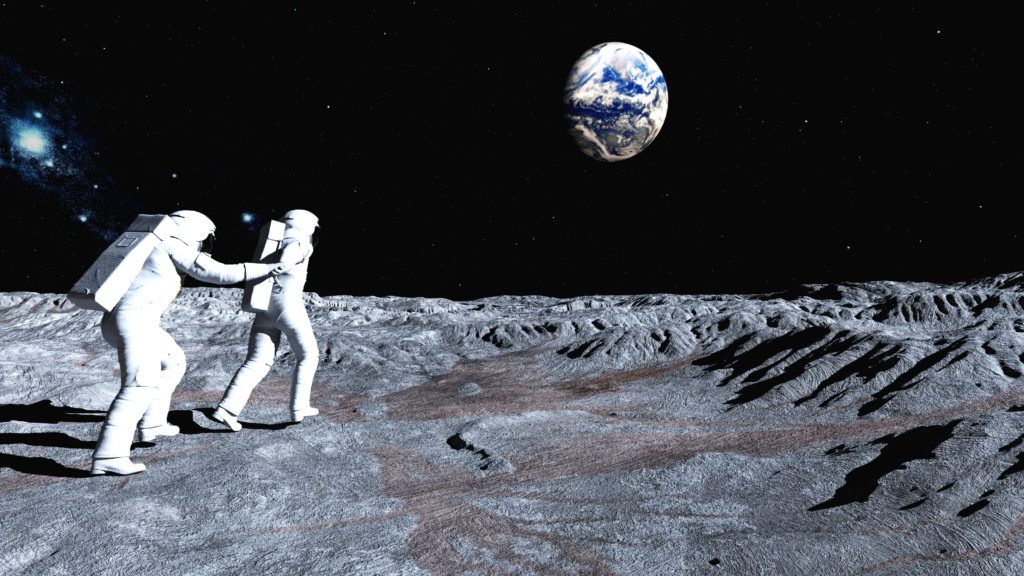 The image follow me to Saturn 3D illustration. Structures are generated in 3d to the program

The world needs to be convinced to deploy 1% of global GDP to meet climate goals, but investors could reap huge rewards too

Defeating climate changes will require an effort as great as putting a man on the moon but investors could be huge winners.

“Even though it’s an awful lot of money, it’s more than a realistic goal to really mobilise this capital,” he says.

Dr Pontzen points out that it was 50 years ago that the first man walked on the moon. “Fighting climate change is the manned moon mission of our times. I think this is a good analogy and it may help us to mobilise enough capital to really shape the future,” he says.

He also suggests comparing the Dow Jones, which actually showed losses in the run up to moon shot, with the stellar returns from firms involved in the programme such as IBM with a 170% return and especially Boeing which delivered as much as 972%.

While he accepts this is not a perfect or scientific comparison, he says much may depend on how early investors moved and there is similar risk of missing out with climate change investment opportunities. We are not at the equivalent of 1962 nor as late as 1967 (two years before the moon landing) but maybe 1963 or 1964.

He admits all this is anecdotal, but the manager is also doing serious analysis work as well.

Meeting or missing the 2% target

The firm is expanding its ESG approach using KPIs where it can put a number on a business’s contribution to CO2 levels, relate its contribution to further temperature rises based around the global goal of keeping rises to 2 degrees, and begin to assess a firm’s future approach. The current Union Investment sustainability research database, developed in the last seven years, comprises a remarkable 72,000 securities.

What the manager calls its climate change indicator combines five KPIs looking at CO2 intensity, the temperature contribution of the firm, the demand to change partly determined partly by how far the firm is from meeting the two degrees goal, the willingness to change and a business’s climate change governance.

The asset manager believes it has created a system that combines not just past information, but also indicates likely future performance with other important inputs such as specialist media monitoring for reputational risks including of social media.

However this leads to rather grim calculations. Volkswagen, for example, produces 44 tonnes of CO2 per million euros of turnover.

“We won’t even stop in the three to five degrees scenario, if the whole German automotive sector continues working as Volkswagen did in the past. This is telling us this company has to move massively. But we have seen there was little demand to change, but also little willingness.”

Yet, he asks, does that mean Volkswagen is just lousy for climate? Because of this record and the recent scandals, it does not pass muster for any of Union Investment’s ESG portfolios.

Yet in the last couple of years it has begin to improve, developing its EV capabilities while its developing approach to climate governance does score 90 out of 100.

Asset managers will therefore really need to test themselves in terms of assessing three different “time zones” of the past, present and future behaviour.

Indeed, many companies in challenging sectors are scoring highly, with Siemens a prime example.

“It’s a global player but the temperature contribution is close to what would we say is an acceptable aim for global temperature rise. Therefore, demand to change is low, whereas the willingness to change, as shown in the past, is great, almost perfect. And its climate governance couldn’t be better.”

Yet Pontzen says that besides the analysis, the industry needs to convince investors and trustees of the need to deploy capital and change things by deploying some hard hitting arguments – including the risk to people themselves.

He says the Earth currently risks a rise well above the 2 degrees’ emissions target. Indeed it could be 4 degrees.

When climate sceptics point out that even without CO2 emissions, the Earth was 14 degrees warmer during the period of the dinosaurs, he says the retort is that “we wouldn’t have an issue with 14 degrees if we were dinosaurs, but we are humans”.

He says it may also require tough messages about risks to world food systems and even the threat of mass migration.

He says: “The scenario of three to five degrees, might be a tipping point for the system of winds worldwide. If we look at the Indian summer monsoon, that is the nutrition of 1.3 billion people in India depending on this system of winds. There might be a situation in some decades’ time where we don’t have any food in India.”

He suggests it may need stark comparisons such as pointing out that Alexander the Great and his army was able to walk from Europe to India, so people can do the reverse.

“If you look at the Syrian crisis, that was only 12 million people. This is 1.3 billion. This all boils down to the following conclusion. It’s not about environmental protection alone, but about our interests.”

He says the financial industry depends on plausible scenarios for thinking ahead for the next five years, but if there is a three to five-degree change, they will be not able to do so.

He adds: “Our interests as investor and trustees is to have a world which is still predictable.”