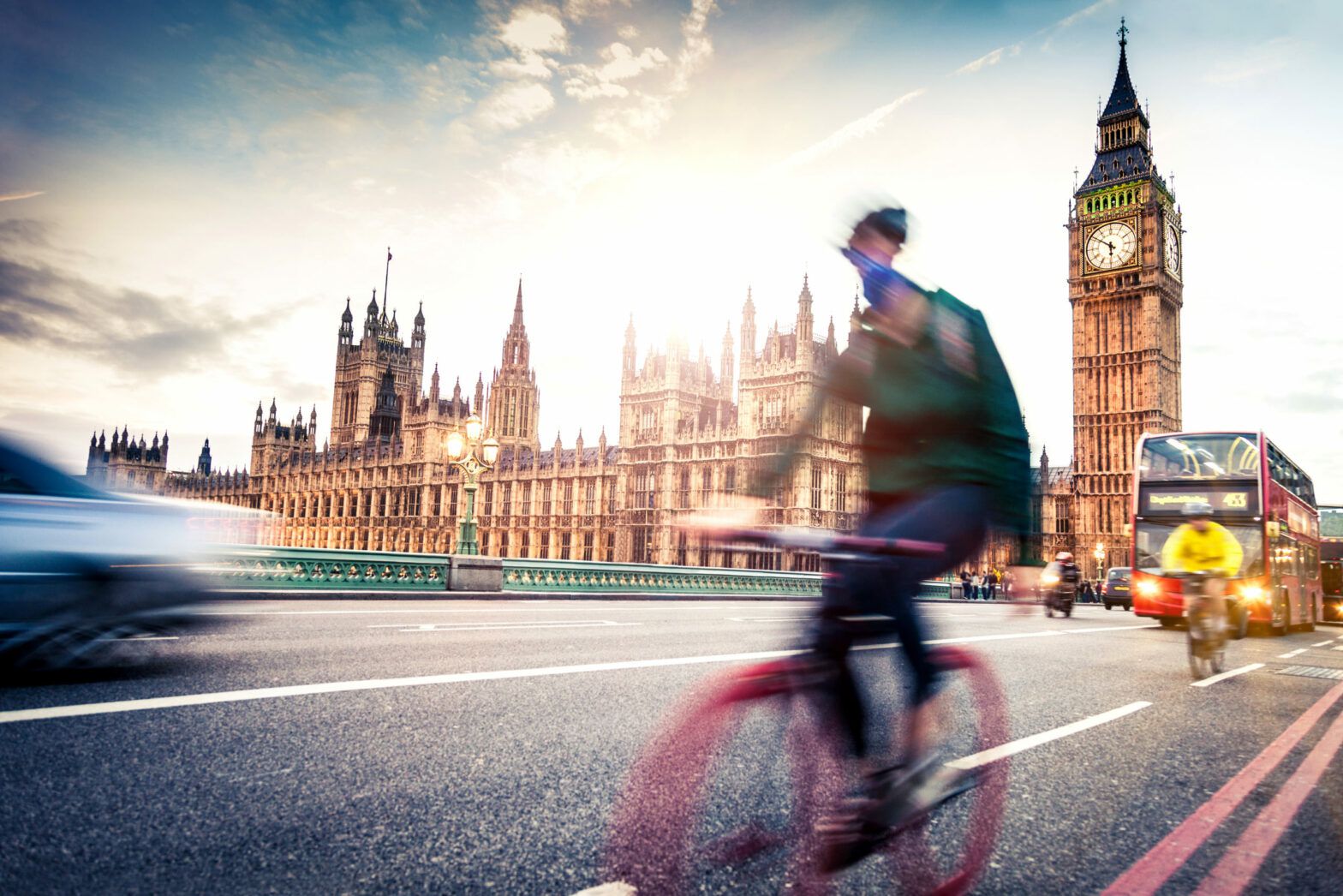 Commuter back home on Westminster Bridge at dusk.

The UK government is urging the financial sector to support its net-zero targets as it confirms it will create a ‘Green Taxonomy’ as well as ensuring financial regulators take climate change and the environment into consideration.

In the report Build Back Better, released alongside the annual Budget statement from the chancellor yesterday, the government said it will be a taking a “transformational approach” in its recovery plans, after Rishi Sunak noted the “acute damage” coronavirus had had on the economy over the past year.

“This plan for growth is a call to arms to put this right,” wrote prime minister Boris Johnson in the document. “Our mission is to unleash the potential of our whole country and restore the energy and confidence. Just as the government has done whatever it takes to support lives and livelihoods throughout the Covid crisis, so we will turn that same ambition and resolve to the task of our recovery.

“We will level up our country, so the map of our whole UK is lit up with competitive cities and vibrant towns that are centres of life – places people are proud to call home, with access to the services and the jobs they need to thrive.”

Alongside plans to improve innovation, upskill the workforce, ensure a “global Britain” and boost infrastructure, the report dedicates a chapter to net zero, with the government building detail on plans for its “green industrial revolution”.

The report said the UK has “long been at the forefront of tackling climate change” with the 2008 Climate Change Act being the first legislation in the world to provide a comprehensive framework to tackle global warming. In 2019 it was amended to commit to net-zero emissions by 2050. It also said the UK has reduced greenhouse gas emissions by more than 40% between 1990 and 2019.

The government announced last year its Ten Point Plan for Green Industrial Revolution, directing £12bn into key technologies such as hydrogen, offshore wind, nuclear, electric vehicles, heat and buildings, and the Treasury’s Net Zero Review, analysing how policy can transition to deliver net-zero in a way that fairly distributes the costs and benefits, has been underway since 2019.

However, it added meeting the upcoming carbon budgets and net-zero targets will require “significant investment and is a major opportunity for economic growth and job creation across the country”.

Having previously announced firms will be required to disclose the climate risks they face in line with the recommendations of the Taskforce on Climate-Related Financial Disclosures (TCFD), the adjustment of the Bank of England’s monetary and financial policy remit to include climate change risk, the Build Back Better report also said the UK government intends to “fully implement a Green Taxonomy”.

It has been unclear whether UK asset managers needed to comply with the EU Taxonomy, a classification to determine whether an economic activity is environmentally sustainable that is set to come into force at the end of 2021, as the UK has left the EU but has operations in the region.

The UK government report said: “As the chancellor set out in his vision for financial services, the UK government’s ambition is for a greener industry, using innovation and finance to tackle climate change and protect our environment. The UK government intends to fully implement a ‘Green Taxonomy’ to provide a common standard for measuring firms’ environmental impact.”

Furthermore, it said it will be ensuring financial regulators take climate change and the environment into consideration in exercising their statutory functions and that it has joined the International Platform on Sustainable Finance to ensure standards can operate internationally, indicating the Green Taxonomy is likely to be aligned with the EU version.

The report also said part of the government’s economic strategy for delivering an environmentally sustainable net-zero economy was for market participants to have the skills they need by through the Green Finance Education Charter and its toolkit.

Announced initially in 2019 as part of the government’s ‘Pathway to COP26’, the Charter asks financial services professional bodies to engage on issues related to climate change and environmental issues, develop and promote relevant resources to members on green and sustainable finance and encourage the adoption of relevant global frameworks, including the Principles for Responsible Investment, and the TCFD.

The finance sector can also play its part in participating in the £15bn green gilt issuance this summer, which will “help fund critical projects to tackle climate change and other environmental challenges, finance important infrastructure investment, and create green jobs across the country”, and also noted the green retail savings bond linked to the green gilt programme, providing all savers with the opportunity to back green projects.

The government also said it is “taking action to fulfil our commitment to be the first generation to leave the natural environment in a better condition than we found it” through the £80m Green Recovery Challenge Fund, which is supporting nature recovery through 68 projects, and the Nature for Climate Fund, which will scale-up tree planting and peatland restoration in England.

“We are taking advantage of our new freedoms to fundamentally reform our system of farm payments in England to prioritise climate and environmental benefits while boosting productivity and animal welfare. And we are progressing major waste reforms which will drive new jobs and investment in a more circular economy,” the report said.

The net zero chapter of Build Back Better also shares government plans to grow the number of net-zero industries and “encourage new ones to emerge”. This includes working with industry, aiming to generate 5GW of low-carbon hydrogen production capacity and capture 10Mt CO2/year by 2030, and ending the sale of new petrol and diesel cars and vans in 2030, as outlined in the Ten Point Plan.

Up to 250,000 “highly skilled” green jobs are set to be created in the heat pump installations, offshore wind, hydrogen and energy efficiency sectors and the government is also aiming for “net zero clusters in our industrial heartlands”.

The report also highlighted the new Leeds-based Infrastructure Bank, also announced in yesterday’s Budget, which will ‘crowd-in’ private investment to accelerate progress to net zero, helping to level up the UK. This will invest in local authority and private sector infrastructure projects, as well as providing an advisory function to help with the development and delivery of projects. It will be able to deploy £12bn of equity and debt capital and be able to issue up to £10bn of guarantees.

Peter Bachmann, managing director of sustainable infrastructure at Gresham House, welcomed the announcements but called for further detail. He said: “The Build Back Better document, which sets out £100bn in infrastructure spending for 2021-2022, is great for grabbing headlines, but lacks detail.

“The document mentions £5bn for gigabit broadband, but the Department for Digital, Culture, Media and Sport (DCMS) has not been clear on how and when this will be available, starving alternative networks trying to build gigabit networks now. In fact, the DCMS has indicated many of the current schemes have overspent but have not been provided with more capital. By not giving absolute clarity on when and how this £5bn will be available, the government is only maintaining the country’s digital poverty.

“Although the government’s net-zero plan commits to 600,000 heat pump installations per year, questions about how this will be funded remain unanswered. At a cost of typically £10,000 per installation, it is unclear whether householders will be expected to pay.”

Randeep Somel, manager of the M&G Climate Solutions Fund, commented on the government supporting a hydrogen hub in South Wales for carbon free transport fuel as part of the Ten Point Plan.

“The UK is a leader in the manufacture of electrolysers that convert renewable energy into hydrogen for transportation through Sheffield based ITM Power. We are also home to fuel cell IP company Ceres Power whose technology can convert hydrogen back into clean energy. As global companies such as Airbus look to decarbonise aviation through the switching from kerosene to hydrogen in the next decade and a half, the UK looks well placed to benefit from the advances in green technology.”

David Hunter, CIO of Renewity, said: “The Chancellor’s commitments to open up access to green investments, be that by institutional or direct investors,  is an extremely positive step forward, but only addresses one part of a wider issue.

“If we’re to deploy the necessary level of capital needed to meet the Paris Agreement renewable energy investment targets, there needs to be a structural shift in the way that institutional investors currently allocate assets to renewable energy managers.