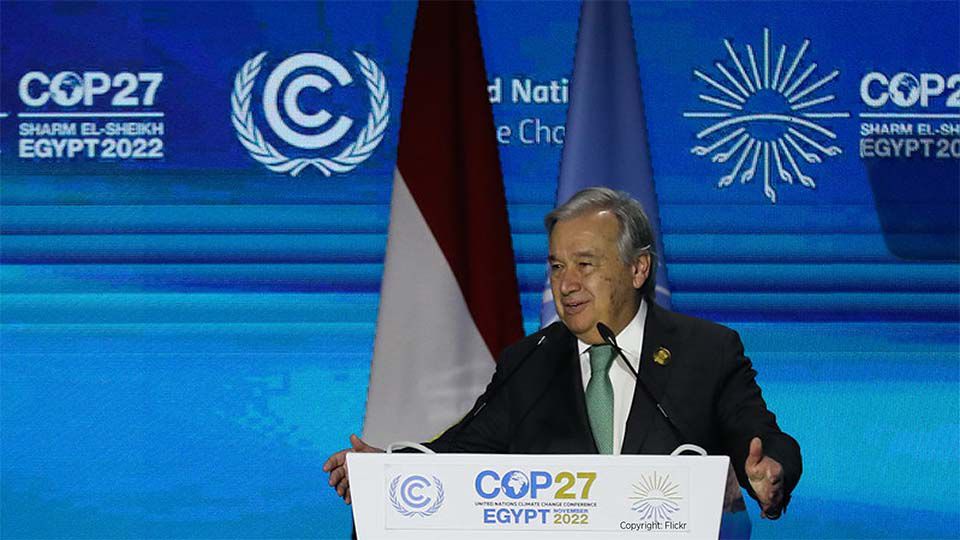 At the launch of a roadmap for financial institutions and businesses to achieve net zero at COP27 today, UN secretary-general, António Guterres, has called current pledges “bogus”, calling for them to be aligned with the new guidance.

“I have a message to fossil fuel companies and their financial enablers,” he said.

“So-called ‘net-zero pledges’ that exclude core products and activities are poisoning our planet. They must thoroughly review their pledges and align them with this new guidance. Using bogus ‘net-zero’ pledges to cover up massive fossil fuel expansion is reprehensible.”

He was speaking in Sharm el-Sheikh at the launch of the report, Integrity Matters: Net Zero Commitments by Business, Financial Institutions, Cities and Regions, by the expert group Guterres set up at COP26 last year that is chaired by Catherine McKenna.

The report sets out a roadmap for firms and recommends they have short-, medium- and long-term absolute emissions reduction targets across their value chain at least in line with the latest Intergovernmental Panel on Climate Change net-zero greenhouse gas emissions modelled pathways that limit warming to 1.5°C. Firms are recommended to do this for Scope 1, 2 and 3 emissions.

It lays out stricter guidelines than other voluntary groups have, such as requiring firms to not invest in new fossil fuel supply or deforestation.

“Non‑state actors cannot claim to be net zero while continuing to build or invest in new fossil fuel supply. Coal, oil and gas account for over 75% of global greenhouse gas emissions. Net zero is entirely incompatible with continued investment in fossil fuels. Similarly, deforestation and other environmentally destructive activities are disqualifying,” McKenna stated in the report.

Further recommendations for avoiding greenwash include:

“Targets must cover all greenhouse gas emissions and all scopes of emissions,” Guterres said. “For financial institutions, this means all financed activities.”