Keeping oil in the ground ‘mission critical’ to financial stability 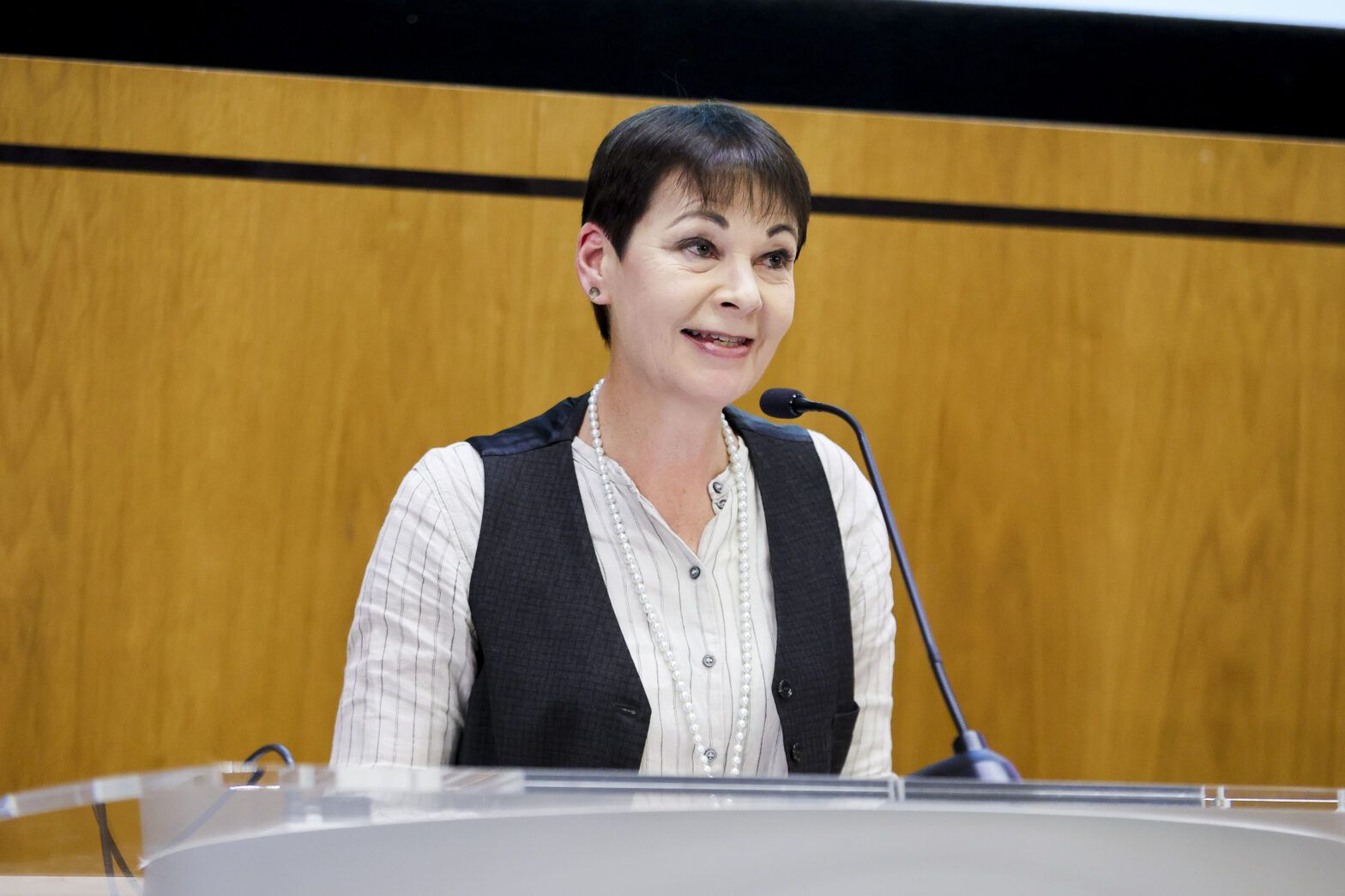 The stability of our financial and political systems depend on ending extraction of new fossil fuels, a UK Sustainable Investment and Finance Association (UKSIF) conference was told by Green MP, Caroline Lucas (pictured), this week.

In a keynote speech to delegates on day two of the conference, Lucas said: “Choosing to leave fossil fuels in the ground is mission critical to our financial stability… Nothing short of this level of ambition would suffice.”

Her comments echoed the United Nations’ report on net-zero commitments by non-state actors, published on Tuesday. The Integrity Matters: Net Zero Commitments by Business, Financial Institutions, Cities and Regions, by the expert group set up at COP26 last year, warned investing in new fossil fuel production should be a “disqualifying” criteria for firms calling themselves net zero.

Lucas told the conference “outright restriction on lending to new fossil fuel projects should now be on the table” and suggested there should be a one-to-one capital requirement for banks lending to fossil fuel production rather than “gambling with the public’s money”.

She argued a lack of restrictions could undermine stability at a number of levels.

“The scientific reality makes clear that fossil fuel assets are uneconomic and financially uncompetitive in a 1.5°C, or indeed a 2°C, world. Or to put it another way, fossil fuel financing increasingly threatens economic stability, I would argue political stability as well.

“It increases the physical risks of climate change, thereby leaving the finance system exposed to significant losses from balance sheets and from environmental damages to the wider economy.”

Looking at the UK specifically, Lucas noted the London Stock Exchange (LSE) is far more exposed than other stock exchanges because listed fossil fuel companies typically make up around 15% of the exchange value and the fact the LSE holds a “staggering” 30 times more embedded emissions than can safely be burned.

Meanwhile, in a panel on day one covering ‘The impact of the political environment on the green agenda’, panellists analysed the UK’s commitment to net zero under the new PM Rishi Sunak noting he was behind some sustainable initiatives in his role as chancellor and announced the Transition Pathway Taskforce (TPT) at COP26 last year, but he also initially said he wouldn’t be attending COP27 to focus on the Autumn Statement. This decision was reversed, and Sunak attended proceedings on Sunday and Monday in Egypt – but his priorities have been questioned.

Panellist Stephanie Maier, global head of sustainable and impact investment at GAM Investments, said we are in a better position than a month ago, when there was a lot more uncertainty under Liz Truss, but all agreed the UK needs to step up in order to not be left behind – they flagged the EU and US accelerating their own transitions.

“The US has thrown a lot of money at the Inflation Reduction Act and I think it will be successful,” Maier told delegates. “It is underestimated today the impact that will have on global trade and what it will mean for their transition.

“In the UK, there has been a real shift in narrative; there isn’t any money left and the government is looking at making huge cost reductions – how does that change the debate?”

Tim Lord, head of climate change at Phoenix Group, added: “It’s not a question now of whether we [the UK] are going to be ahead still but are we going to be left behind? The EU is already frontrunning since it passed its climate laws and Fitfor55, as well as deploying EU budget.”

However, the panel – which included UKSIF CEO James Alexander as moderator and Elizabeth Gilliam, head of EU government relations and public policy at Invesco – agreed governments need to do a lot more in terms of policy and regulation.

Maiers said regulation that sets standards, bans or phases out certain things sends “strong signals” from the government to companies and “can be very effective” but we need “real economy policy”. Progress has been made, she added, pointing to the UK making adhering to Task Force on Climate-related Financial Disclosures mandatory, and linking the International Sustainability Standards Board to the Transition Plan Taskforce.

However, she said: “Disclosure won’t necessarily get us there fast enough.”

Lord added: “There are really important parts of the transition the UK can do within financial services and the geographical and physical capabilities around offshore wind.

“But the government needs to be really clear about where it sees the opportunities in the UK and aligning budgets and policy with that.”

A further panel on day one of the conference looked at how the regulatory landscape is shifting and heard some of the issues being experienced with new sustainable finance regulations plus some wish list items for where panellists would like to see things going.

The EU Sustainable Finance Disclosure Regulation came into force in March 2021 and according to Ingrid Holmes, executive director at the Green Finance Institute, it has become an expensive task that “doesn’t work in many ways”.

“That’s a lot of money deployed, effectively, to a tick box exercise.”

She used the example of the FTSE All-Cap alignment with the EU taxonomy, which has roughly a 5% or 6% alignment in terms of positive contribution.

“If you add in ‘do no significant harm’, it’s down to 0.4% because it’s just impossible to report.

“One of the things we’re playing with is, if we know ‘do no significant harm’ is in there because we don’t have a sustainable economy, we have harm being done, and should we be looking at applying it on a risk basis?”

Holmes suggested it may be more effective to ask firms to assess broader environmental harm and putting in place capital expenditure plans to remediate that over a period of five years or so.

“That would really start to shift the dial rather than just taking a tick-box approach,” she said.

Ruth Knox, partner at Kirkland & Ellis International, pointed to another element of SFDR that has been a “hot topic” for her clients – whether or not it is possible to have a taxonomy-aligned real estate investment that had moved from brown to green.

She said she was pleased that under the ‘sustainable improvers’ fund label which forms part of UK Sustainability Disclosure Requirements (SDR) regime proposals there is now scope for these investments to be taxonomy aligned, in principle at least.

“They view it as almost reverse engineering what they’ve been doing into a framework that doesn’t quite mesh well,” said Knox.

“I think there was also an expectation with respect to the [EU] social taxonomy and then when that did not materialise there’s the sense that with your social funds there’s less certainty as compared with your environmental or climate funds, which isn’t that helpful for that side of the market,” she commented.

On the regulation wish list of Carbon Tracker, according to panellist and senior policy and government affairs adviser, Richard Folland, is more detail on how fossil fuels will be phased out.

“We would like to see GFANZ (Glasgow Financial Alliance for Net Zero) doing a little bit more around managed phase out… Providing guidance to companies [around what they are] doing in terms of transitioning away from fossil fuels.”

He noted guidance that came out from GFANZ last week around an orderly transition to a low-carbon economy shied away from granularity in terms of fossil fuel investment policies.

A panel on the second day of the conference looking at sovereign debt and ESG investing weighed the merits of vanilla bonds over green or social, and discussed the importance of working with local actors to avoid the label of an interfering outsider.

Graham Stock, partner, senior sovereign strategist – emerging markets at BlueBay Asset Management, said when you are working with use-of-proceeds bonds that have a green or social objective, you need to allow for the fact they may not end up being used in that way.

“If you look at the bond documentation that says government will use the proceeds in this way, but there is a caveat that they might not. That’s not worth the paper it’s written on. So I think there is room for the lawyers to do more work in tightening that up.

“But then you run into the potential challenge that maybe a future government doesn’t agree with those commitments… These are democratic regimes, and you could see a change in government. You have to allow room for that,” he said.

Ella Hoxha, senior investment manager at Pictet Asset Management, said she has been impressed by investment solutions using proactive strategies in the nominal sovereign debt space that have come forward over the past year and these have been her team’s sovereign debt starting point.

Hoxha said they use objective metrics to allocate to sovereigns – for example, in the case of climate change, ensuring the sovereign is reducing emissions over time and improving the efficiency of those emissions.

“And on top of that, we look at policy as a forward-looking component,” she explained.

She said although her team uses green bonds they would not be a starting point.

BlueBay has been co-chairing engagement with Brazil as part of the Investor Policy Dialogue on Deforestation (IPDD) and pointed out investors must tread carefully when engaging with sovereigns.

“We’ve always engaged with sovereigns gently – pushing them for more transparency around their budget, for example. Now we’re moving into newer areas and we need to be careful about not stepping on toes.

“In many cases these are democracies and we shouldn’t be trying to usurp the role of the electorate, but where there are issues… important for our portfolios, we should make that case. And that’s what we’ve done with the IPDD,” he said.

“We have had conversations with a number of different ministries and actors there. The central bank has been very helpful. Even the environment ministry wanted to talk about the issue and understand where we were coming from,” he said.

The fact the team has been engaging has been positive and helped civil society in Brazil to understand that they’re not alone in raising their voice over this issue and that it matters for the financial sector, Stock explained.

“And we were quick to involve Brazilian investors in our coalition, so we weren’t vulnerable to the accusation that it was foreigners meddling in domestic politics,” he said.