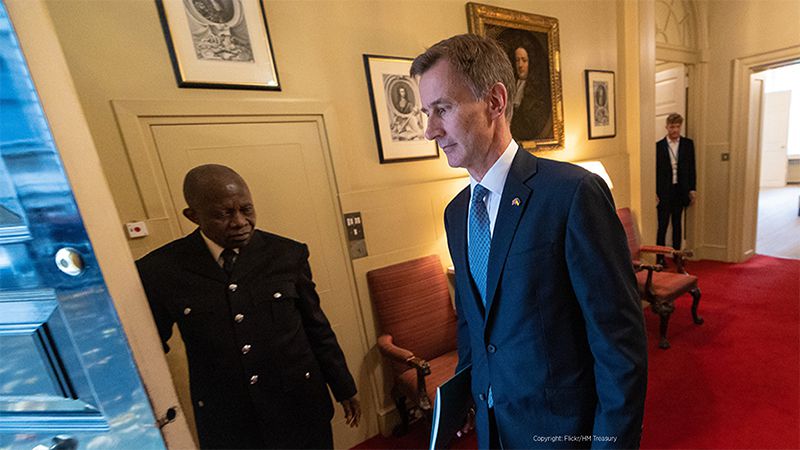 Yesterday’s Autumn Statement has been described as a “mixed bag” of green policies, as the UK government attempts to tackle the cost of living and energy security crises.

However, the “divergent” policies have prompted further calls for the UK government to double down on the renewable energy transition and clarify net-zero policies.

Amid a cost-of-living crisis and increasing concerns about energy bills for the consumer, and energy independence for the state, new chancellor Jeremy Hunt dedicated a proportion of the Autumn Statement to green initiatives with the key announcements being:

– An increase on windfall tax for oil and gas companies to 35%.

– Launch of an Energy Transition Taskforce.

However, ESG investment professionals were also disappointed to see:

– Tax being applied to electric vehicles from 2025.

– Government proceeding with the nuclear plant at Sizewell C.

In his speech, Hunt said: “Britain is a global leader in renewable energy. Last year, nearly 40% of our electricity came from offshore wind, solar and other renewable sources. Since 2010, our renewable energy production grew faster than any other large country in Europe.”

He added: “I have no objection to windfall taxes if they are genuinely about windfall profits caused by unexpected increases in energy prices.

“But any such tax should be temporary, not deter investment and recognise the cyclical nature of energy businesses.”

Director of the Conservative Environment Network Sam Hall commented: “Given the fiscal backdrop, a windfall tax on energy firms is understandable. But it is concerning that electricity generators will face a higher rate than oil and gas companies, with no equivalent investment allowance for new wind and solar projects.”

The increased tax rate for oil and gas companies was also questioned for not being targeted enough as Laura Hoy, equity and ESG analyst at Hargreaves Lansdown, said: “The windfall tax has also been accelerated and extended as the government looks to the energy companies riding high on ballooning oil prices to plug its budget shortfalls.

“However, the increased tax rate does little to combat the loopholes that allow oil and gas companies to duck their tax obligations by reinvesting in new projects. The eco-credentials of those projects aren’t tied to these breaks, so there’s no added incentive for reinvestment in green energy instead of handing those funds over to the government.”

Hunt said the UK needs to go further with renewable energy as “there is only one way to stop ourselves being at the mercy of international gas prices: energy independence combined with energy efficiency,” he said so “neither Putin nor anyone else can use energy to blackmail us”.

“We need to go further, with a major acceleration of home-grown technologies like offshore wind, carbon capture and storage, and, above all, nuclear. This will deliver new jobs, industries and export opportunities and secure the clean, affordable energy we need to power our future economy and reach net zero.”

He announced the government will proceed with the nuclear plant at Sizewell C creating 10,000 jobs and power for the equivalent to six million homes over the next 50 years.

“Energy security is top of mind in the wake of the Ukraine war and additional nuclear investment offers a way to build new baseload energy capacity, reduce carbon emissions and lessen reliance on energy imports from unstable political regimes. That said, nuclear energy is not a panacea for the UK’s transition challenges. It is expensive, and there has been a tendency for costs and delivery times to blow out relative to original plans. It should also not distract from the need to incentivise investment in already cheaper renewable technologies with greater potential for further cost declines.”

However, he added the UK’s current net-zero strategy is “not fully credible” and called on the government to reconsider its strategy over the coming year “to give greater clarity and certainty to investors looking to build on their own transition plans”.

Commentators were more encouraged by the doubling of investment in energy efficiency and launch of the Energy Transition Taskforce (EETF) and dismissed the introduction of tax on EVs as inevitable.

On the taskforce, the government announced a long-term commitment to drive improvements in energy efficiency to bring down bills for households, businesses and the public sector with an ambition to reduce the UK’s final energy consumption from buildings and industry by 15% by 2030 against 2021 levels. It said fresh government funding worth £6bn will be made available from 2025 to 2028, in addition to the £6.6bn provided in this parliament.

“To achieve this target, a new EETF will be charged with delivering energy efficiency across the economy,” government documentation said.

“It was encouraging to see the chancellor address the underlying issue of energy efficiency in the UK with a pledge to double the government’s annual investment and decrease consumption by 15% by 2030,” Hoy said.

“A new energy efficiency task force will be set up to determine exactly how to funnel the additional £6bn pledged to the projects that need it most. However, judgement on whether or not these programmes are adequate to truly make a dent in the necessary refurbishments around the country will be reserved for their unveiling.”

Summarising the green initiatives, Laith Khalaf, head of investment analysis at AJ Bell, said the government is trying to tackle a number of crises: “Overall the Autumn Statement was a bit of a mixed bag for environmentalists.

“Given the increased prevalence of electric cars on the road, it was somewhat inevitable that at some stage the government would look to start taxing these vehicles, and it’s not surprising to find the Treasury deciding to do that at a time when government finances are under pressure.

“The increase and extension of the windfall tax on energy companies on the face of it penalises fossil fuel producers, but the tax reliefs on offer actually incentivise new investment in North Sea oil projects. The electricity generator windfall tax will also penalise less low carbon electricity sources, but at the same time the government is increasing the amount it’s spending on energy efficiency, and has committed to the nuclear plant.

“The seemingly divergent policies the government is pursuing probably reflect its twin desires to reduce emissions while solving the current energy crisis.”