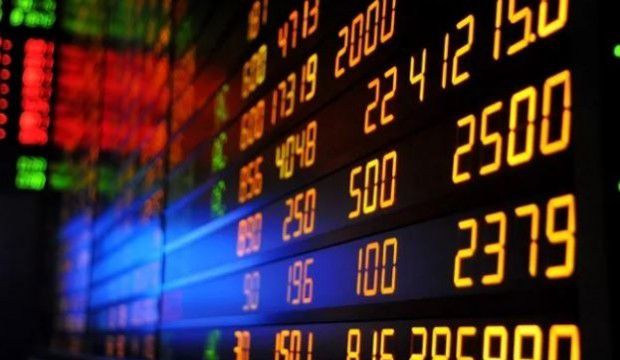 The trade conflict between the US and China has negatively affected investor sentiment, but Luciano Diana, Geneva-based head of environmental strategies, believes it is only noise, despite the negative effects on his fund’s portfolio.

In June alone, the Pictet Global Environmental Opportunities Fund, which Diana manages, was down -3.33%, while its benchmark index, the MSCI World, was -0.01%, according to FE data.

Other environmental-focused funds were also down during the same period. BNP Paribas’ Parvest Global Environmental Fund was down -1.23%, while the Nordea Global Climate and Environment fund fell -2.37%, FE data shows.

Diana believes the tariffs imposed by the US and China’s retaliatory tariffs are the key reasons for his fund’s recent under-performance.

In particular, the automotive supply chain and semiconductor companies were hit hard, according to Diana. The fund’s exposure to those sectors is 10% each.

However, he did not make any major changes in the portfolio. “We don’t react to short-term noise. Maybe in a few weeks time, things will calm down on the market front.”

The fund also under-performed at the end of 2016, just after Donald Trump was elected as US president.

“Different things happened there. He said he favoured the oil and gas sectors and there was a lot of narrative around climate change, with Trump saying that the US would pull out of the Paris agreement.”

According to Diana, he didn’t make any major allocation changes based on the apparent shift in US policy.

He explained that local policy has a stronger impact on the fund than federal policy. “Even if the country doesn’t subscribe to the Paris agreement, there is actually a coalition of cities in the US that subscribe to it.”

The fund invests in companies that in some way positively impact the environment. The manager looks at different themes and segments, including energy efficiency, waste management and recycling, pollution control and renewable energy.

At least 20% of the company’s revenues should come from a particular theme or segment. There are around 400 stocks within the fund’s investible universe.

In terms of geography, the fund has little exposure (4%) to emerging market stocks.

“We have some issues with governance, transparency, access to management and volatility, which somewhat drag down their scores in our scoring process,” he said.

Diana acknowledged that it is also an issue of coverage. “We do our own analysis and we also use third-party research. But the coverage for third-parties on governance in emerging markets is slower and more spotty, so we have less third-party data to rely on.”

Nevertheless, emerging markets play a role in driving performance. Although around 90% of the fund is directly invested in North America and European stocks, 28% of sales for environmental-related companies come from emerging markets.

“The drivers here are linked to economic growth, such as the population growth in emerging markets and the rise of the middle class, which is expected to create more demand to challenge pollution,” Diana said.

In terms of segments, the fund’s largest exposure (28%) is to companies operating in the sphere of energy efficiency, according to Diana. They include semiconductor manufacturers and those that provide energy efficient products, such as insulation.

On the flipside, the fund currently has zero exposure to renewable energy, in spite of the growth in the sector. The sector’s three-year compounded annual growth rate in sales for 2019 is expected to hit 7%, which is higher than the energy efficiency sector, which is 6.4%, according to Pictet.

“Sales growth in the renewables sector is there, but what is missing is actually earnings growth,” Diana said.

Diana believes that the sector should further cut costs along the value chain. “There’s a lot of price pressure across the industry and at the moment, the end-consumer benefits the most, not the company itself,” he added.

The Pictet Global Environmental Opportunities fund versus its benchmark index 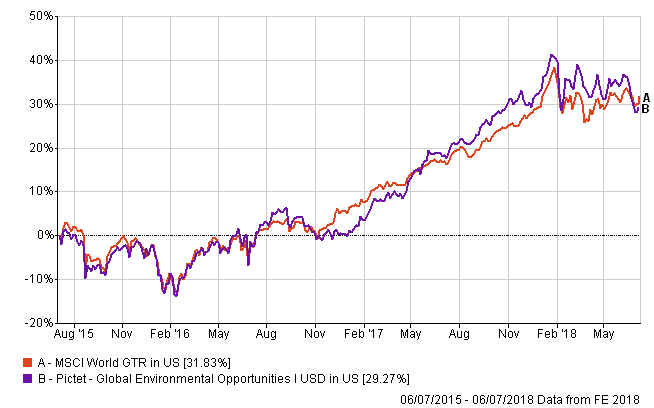 Fund and sector NAVs have been converted to US dollars for comparison purposes.