Does impact investing have an image problem? 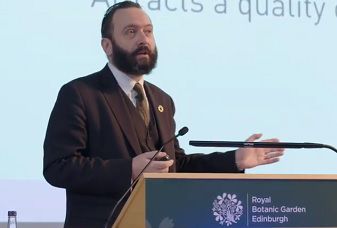 Can a new stock exchange based in Scotland change how people think about investing for purpose?

Despite the growing popularity of impact investing and the broader ESG universe, many investors still believe that achieving a positive impact must come at the expense of financial returns.

Tomas Carruthers wants to change this notion of ‘concessionary capitalism’, and has set about doing so through Project Heather, a new stock exchange based in Scotland and focused on facilitating investments into businesses delivering a positive impact to society.

Carruthers – a former CEO of the Social Stock Exchange – set out his project and its progress in a keynote speech at the Responsible Asset Owners conference in London earlier this month.

“The social and environmental impact of the investment is just as important as achieving a market-rate financial return,” he told delegates.

Project Heather is designed to be the first stock exchange in the world to require all its listed companies to report regularly on the social and environmental aspects of their businesses, using a reporting framework common to all businesses. Companies will be delisted if they do not keep their promises, Carruthers said.

He added: “If we’re going to move capital towards climate action, or towards a just transition, voluntary standards aren’t good enough. We need standards that are enforceable.”

The new exchange would maintain a local flavour, Carruthers said, aiming to capitalise on Edinburgh’s strong financial services industry. In addition, Scotland has a long history of regional exchanges: there were stock markets in Aberdeen, Dundee, Glasgow and Edinburgh until the early 1970s when they merged into the London Stock Exchange.

As a result of the loss of these local markets, however, small companies have struggled for financing from outside investors.

“We think there is an access to finance problem in Scotland,” Carruthers explained. “Some estimates by chartered accountants in Scotland place the undervaluation of equity in Scottish companies at as much as 40%.”

Project Heather’s main focus is on smaller, localised businesses with stated aims of making positive impacts on their local communities. The capital gap for these kinds of firms was estimated by Carruthers at £200,000 to £2m.

“If you can find a way to get that to them, then they can continue focusing on the impact that they’re making in their communities.”

Often, Carruthers said, a company’s social mission could be lost during a transition of ownership because new owners did not share the same objectives as the old ones. This problem could be addressed through the transparency of public markets, he argued.

“Every generation, when it creates a new business… the only way to take money off the table is to sell the entire undertaking,” he said. “Intellectual property moves, the organisation is vaporised, and of course the jobs go. That’s not a sustainable way to run an economy.”

The Project Heather founder was also keen to emphasise his ambition to create a global platform for investment into these smaller companies.

The exchange’s rulebook will also be based on that of the London Stock Exchange, ensuring cohesion with existing equity markets. In addition, Carruthers has struck a deal with Euronext to use its technology platform, meaning Project Heather will be using the same systems as the Irish Stock Exchange, the Amsterdam Stock Exchange and others across Europe, ensuring it is accessible to investors around the world.

Project Heather has also been endorsed by the United Nations’ development programme, adding weight to Carruthers’ efforts to align his exchange and the companies listed on it with the UN’s Sustainable Development Goals.