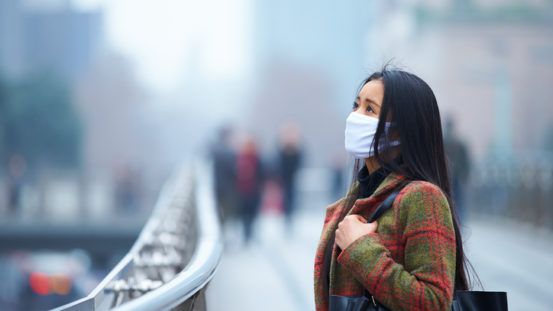 picture of one young asian woman wearing mask in the haze and foggy city.

The opening of the China A-shares market to foreign investors provides a window for China-focused funds to push ESG criteria into greater prominence in the world’s second largest economy.

The environmental crisis facing China is off the scale – literally. Air pollution in Beijing is so impenetrable that the US embassy’s air quality measuring station describes it as “beyond index”. More than half of China’s surface water is so polluted it cannot be treated to make it drinkable. Rivers run black with sludge. Factory farming has led to desertification. Deforestation threatens hundreds to species.

But after avoiding the issue for years, Chinese economic policy is now tackling the country’s environmental problems head on.

AllianceBerstein China equities portfolio manager, John Lin said: “When President Xi Jinping made a speech last year in November it was the first time in Chinese history that the number of words about the environment surpassed the number of words on the economy, which is a real indication that policy makers are prioritising pollution issues.”

On 1 June, the MSCI added 234 Chinese mainland-listed stocks (A-shares) to represent 0.8% of the MSCI Emerging Markets Index. While this initial inclusion is low it is expected that over time A-shares will have a significant representation in the future.

“There is a general misconception that Chinese governance is like the wild west with really bad reporting and management structure.”

“The inclusion into the MSCI global indices is a good starting point for the amalgamation of investor expectations and this will help the governance quality of the A-share market to move up to another level,” Poon said.

Lin said it was hard to differentiate companies within the A-share market that had ESG inclusion due to a lack of A-shares coverage by international rating agencies.

“Up until this month the majority of these A-shares were not really rated at all on their ESG integration. While international investors realise that ESG is important there is not a lot of systematic information,” Lin said.

Lin added that the MSCI said there would likely be a change in ratings over the coming months and quarters as more information became available.

When Expert Investor looked at European domiciled A-shares funds that had a Morningstar Sustainability Rating, only one had achieved the highest rating – five globes.

Both funds had the highest stock weighting in Ping An Insurance Company of China.

Overall, only five funds had a Morningstar Sustainability Rating, emphasising the lack of information on A-shares stocks.

Poon said that China was mostly focused on the ‘E’ side of ESG with a great emphasis on air quality.

“With air quality, President Xi Jinping breathes the same air to ordinary citizens so that is something everybody must care about because they have nowhere to hide or run away from this situation,” Poon said.

Lin said the government was reducing pollution by shutting down non-environmentally compliant makers of industrial goods and resources such as steel, paper, and chemical mills.

“Today you can find cement companies in China that have about the same carbon footprint as international companies. While they are complying with international environmental standards they are also enjoying record profits and they are great investment opportunities,” he said.

Lin noted that the government was also supporting industries that were promoting green or alternative energy such as wind turbines and farms, and solar panels.

“China is also a vibrant landscape for electrical vehicles and batteries. These companies benefit from regulatory compliance that requires companies to reduce pollution on the industrial side so they turn out to be really good investment opportunities,” he said.

“As a European investor if you want to find a pure play place for exposure in electrical vehicle batteries it’s rather difficult to find in Europe. If you go to Japan and Korea a lot of these makers like Panasonic or LG have other businesses so it’s not pure play, leaving the A-share market as an intriguing market to get exposure into that area.”

Lin said on the political side for a mayor to be promoted to the provincial level and later to the central government level, their key performance indicators (KPIs) included pollution measures.

Poon also said the top KPIs for local government officials was not about growth but rather about air and water quality.

“The local governments are not sticking to the old mentality of just growth and disregarding the environment, so I think it is a promising change,” Poon said.

On environmentally compliant companies within the A-shares market, Lin said he liked were fertiliser manufacturer Luxi Chemical Group, solar product developer Longi Green Energy Technology, and electrical vehicle battery maker Catl that has just gone public and will be available for international companies in the future.

Lin noted that the Chinese government had put in place monitoring enforcement activities for these companies to prevent greenwashing and bribery.

Both Poon and Lin said that while China was behind on the governance front it was improving.

“There is a general misconception that Chinese governance is like the wild west with really bad reporting and management structure,” Lin said. “In our experience that’s not true at all.”

“There is a perception that China is all about burning coal and pollution… but it is changing fast.”