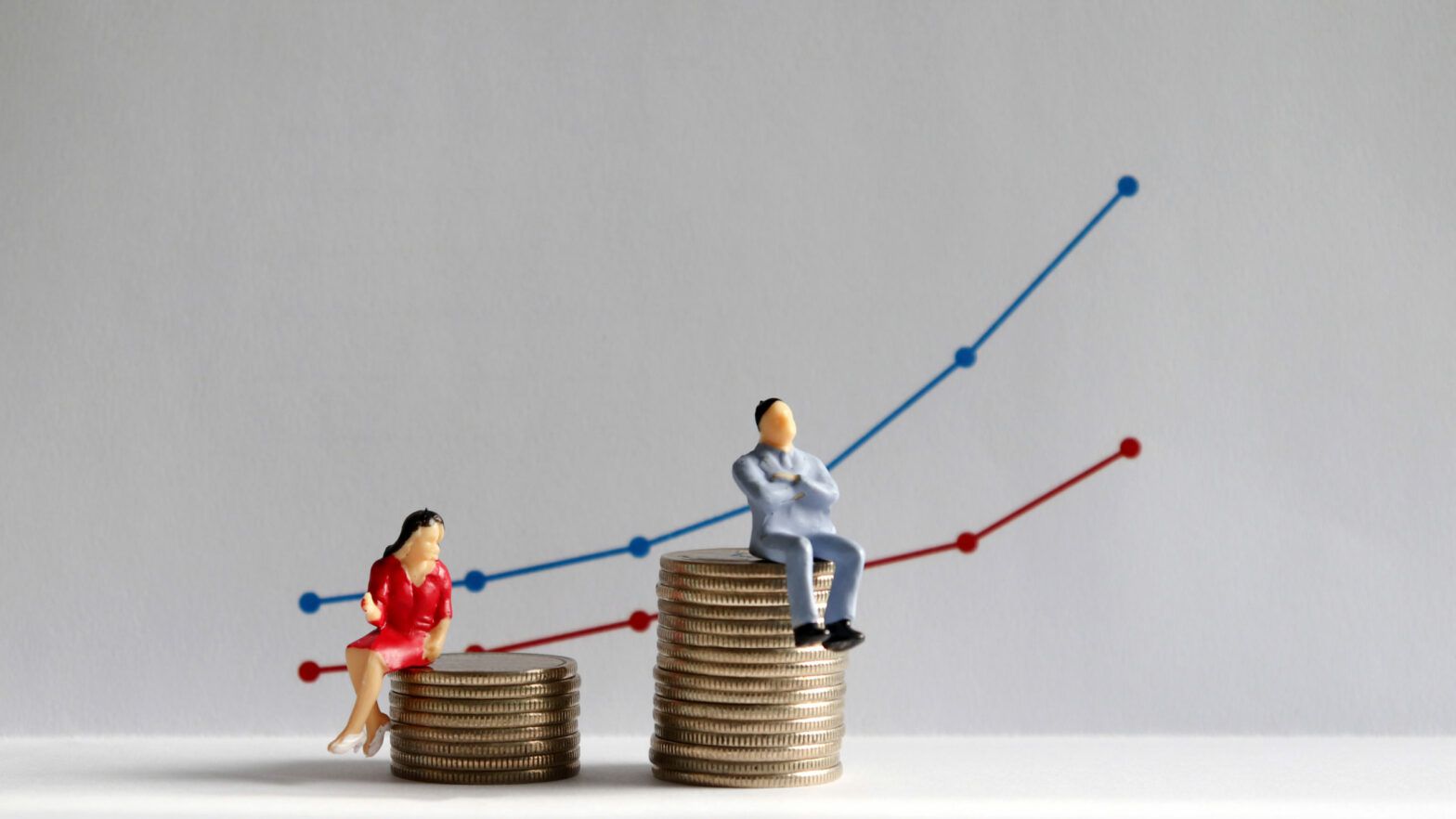 The concept of gender pay gap. A miniature man and a miniature woman sitting on top of a pile of coins at different heights in front of a bar graph.

Despite progress being made to appoint women in executive positions, a 66% gender pay gap at FTSE-350 financial services firms remains because of the tendency to appoint women to lower-paid non-executive director (NED) roles, new research has found.

City employment law firm Fox & Partners found 86% of FTSE-350 financial services firm female directors are in non-executive roles, which it said are inclined to be paid less than executive roles, with less day-to-day responsibilities to conduct.

This means the average pay for female directors at FTSE-350 financial services firms stands at £247,100 compared with £722,300 for their male counterparts.

“It appears from the research that in order to improve board diversity, companies are more willing to give women non-executive roles but are not appointing women to the higher-paid executive roles, which would give them greater influence within the company,” a release of the research said.

“Firms need to be aware that while appointing women to NED roles is a step in the right direction, it only addresses part of the problem. Ensuring women are appointed to permanent senior executive positions will result in their having more influence at a senior, strategic level and will create a greater long-term change.”

This year’s Company Matters report similarly found among the AIM UK 50 the proportion of women directors had risen two percentage points to 20%, but said “unfortunately, the increase in female representation is almost entirely driven by NEDs; there remain few female executives and no improvement on this front.”

ESG Clarity recently covered the final Hampton-Alexander Review highlighting that despite progress there is still “much work to be done” in terms of ensuring more women have positions on executive committees within the FTSE.

Two FTSE 250 constituents, and part of the investment management space, Liontrust and AJ Bell, were flagged for having all-male executive committees.

As we wrote in the editors’ statement for the Campaign for Better Governance, at a time of unprecedented interest in ESG-oriented investing, we believe the investment sector should be practising what it preaches and ensuring that, alongside the businesses to which it allocates capital, its own governance is at the highest possible level.

Fox & Partners similarly noted ESG issues are increasingly high on the agenda for investors and gender diversity forms a significant part of that assessment. It said there is also the risk of sex discrimination and equal pay claims that attaches to significant pay disparity and lack of diversity in senior positions, as well as the potential reputational risk of an apparent systemic issue with gender diversity at the top.

Catriona Watt, partner at Fox & Partners, said: “Despite having greater levels of diversity at more junior levels, financial services firms are still struggling to reflect that shift at the senior executive level.”

“In order to see long term change, firms must be committed to taking steps that will lead to more women progressing through the ranks, getting into senior executive positions and closing the pay gap.”

“Boards need to be open to challenging themselves by asking honest questions about the barriers in their organisation that might prevent women reaching the very top.”